You’d think that after more than six months I would be readjusted to American life.  You’d think that now that I am partway through my second semester of college I would be settling easily into new routines.  However, if you thought either of those things, you’d be wrong.  Four years in Africa conditioned me to a completely different lifestyle.

When it begins to rain I experience a panic-induced surge of adrenaline as my brain tells me that I need to get the laundry off the line.

The internet connection — ranging between sketchy and nonexistent – helps me to feel right at home here at college.  (It’s good to have at least one familiar thing, right?)

When I go to the grocery store and find something I was looking for, I have to remind myself that I don’t need to buy every box of it, that it will be there next week.  After four years of living with constant (and well-founded) low-level paranoia that I will never see something again, I am working hard to break the habit.

What is this chilly foreign substance? Snow, you say?

This is not the equator – it isn’t 70 degrees each day — surprise, surprise.  I am not quite certain how I feel about it.  (Ask me in four months.)

I stifle a gasp each time someone asks for a napkin at the table and try to refrain from asking for a “serviette” lest I confuse people.  And I try to stay on-track when people talk about chips — they are not talking about french fries!

After years of constant fresh air, as the windows never closed all the way even if we wanted them to and there was no such thing as central heat or air, I find that my body greatly dislikes the “fake air” I am forced to breathe in the synthetic indoor environments of the cold North.

When I see critters out of the corner of my eye, my first thought is “Monkey!”  However, there are never monkeys when I look – only squirrels or cats.

I get confused by the whole who-bags-the-groceries thing at the checkout.  I stood waiting for someone to hand me my groceries the other day until I realized that I was supposed to put them in bags as the cashier scanned them.  And someday, when I actually have my own car, I am also going to have to pump my own gasoline – what a novel idea!

I find myself reverently rescuing perfectly good Ziploc baggies from the trashcan and judiciously saving those “barely used” ones before recalling that this is America and nobody thinks anything of throwing away those small plastic treasures. 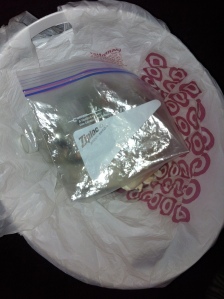 It feels strange to not feel conspicuous.  I grew so accustomed to being the only white girl that I now feel oddly like “part of the crowd.”  I sometimes still think I stick out then realize that I don’t.

I have never been a tea enthusiast, but it still feels odd to go places and not be offered tea.

I wear pants, but in my heart I wish I could wear dresses or skirts all the time.  Whenever I go to church wearing pants I feel as though I am committing some sort of sacrilege!

But what is culture shock really? It is, essentially, the collision of conflicting ways of life and understanding.  For me, both worlds are a reality, and sometimes I don’t quite fit into either of them.  Both experiences are valid, so how do I connect the two?  My life at times seems an incongruous story — this lifetime and that lifetime — yet it is only the beginning.  Every good story takes all the bits and pieces, tying them together in a beautiful whole in the end.  Such is life — a story already written by the masterful Author but seen only in part.  How could I not desire to have a role in such a grand adventure?