Crossing running water on the road to Magadi.

Sundays out in Maasailand are always a wonderful adventure, though I must say that one Sunday was particularly adventuresome.  First of all, it was the longest one-hour drive I have ever been on in my entire life. (It took two hours and forty minutes.)  Secondly, we weren’t just going it alone – we had our family plus Jacob Auma from CMA and a nineteen-member mission team from Canada.  Finally, it is the rainy season, which means that the pothole-filled dirt roads have turned into veritable mud-slides, or, in this case, rivers.  (At the point we found this out, I was congratulating myself for choosing to ride in one of the tour buses with the team instead of the small sedan with my family.)  Perhaps most people would have turned around, but not us.  After all, it’s just another adventure, right?

Oh, what a ride it was! We crossed all those rivers and drove through “puddles” big enough to be ponds, until we finally got to Magadi. The location where we were having a church service: a large, leafy old tree in the middle of nowhere. There was a small church building, but there were far too many people to hold a service in it! Together we worshipped, prayed, and listened to a sermon beneath the big tree that shaded us from the blazing sun. Afterwards we distributed care packages of food.

Out so far into Maasailand, groceries are exceedingly difficult to come by, and, though the rainy season had begun, there had not yet been enough time after the drought for the crops to grow back. Seeing the thankful, excited faces of so many people, old and young alike, made for a lovely last memory to take with us as we began our long drive home.

Upon further investigation, I found out that we were almost at the Tanzania border. Here is a link that shows some interesting facts about Magadi and its “soda lake.”   http://www.webkenya.com/eng/safari/magadi.php

Silence is a beautiful thing.  It is in the silence that I can best hear God speak to me.  I awake early in the morning simply to enjoy a time of soaking in His presence as the sun rises and the birds begin to sing their cheery tunes.  But such idyllic times of quiet are generally not long-lasting.  They are swept away in the busyness of everyday, sometimes completely lost or forgotten.  As much as I love my “quiet time” with God in the morning, I am learning something new: how to carry the silence.  I am learning that I can take that quiet place of listening with me throughout the day.  It is all about allowing His presence to overwhelm your life to the point where your spirit is always sensitive to His God-whispers, about allowing His silence to totally and completely invade your life.  When you do this, circumstances no longer matter; you no longer need to be in a particular place (be it location or circumstance) for God to speak to you because you realize that He is always speaking and you can be always listening, wherever you go and whatever you do.

“I want to be a mirror that reflects all that You are to those around me;

I want to carry Your tantalizing presence everywhere that I go.”

That is the cry of my heart.  If I carry His peace and His quiet, awe-inspiring glory with me wherever I go, people can’t help but see it.  I want to be a carrier of the silence.  How about you?

The beautiful Ngong Hills. Southwest of Nairobi. An hour’s drive from our apartment in the city

These words from Isaiah 6 never fail to grab my attention.  When I read them, something inside me stirs.  That is the kind of girl I want to be – the girl who steps forward and boldly shouts, “Here I am! Use me, Daddy!”  In Genesis 3 we read how the Lord was searching for Adam and Eve in the garden.  When He called to them, saying “Where are you,” Adam replied, “I heard you…[but] I was afraid…so I hid.” That is not the kind of response I want to give when my Lord calls!  Like Samuel (Bible Samuel, not my brother Samuel), I want to be ready to jump up and come running when my Teacher calls. The first three times the Lord called to Samuel, he didn’t recognize whose voice it was; he ran and presented himself to Eli, saying, “Here I am; you called me.” (1 Sam. 3:4)  But the fourth time he was prepared.  This time when the Lord called, he replied, “Speak, for your servant is listening.” (1 Sam. 3:10)

When God calls to me, I want to answer like Moses: “Here I am.” (Ex. 3:4)  It is time for us, as sons and daughters, to pursue our Father’s heart with passion and be prepared to step up and step out.  I am ready to be done hiding; I want something big, something beautiful.  But you see, in order to come out of my hiding place, out of my comfort zone, I have to learn to walk in unrelenting obedience and listen for the God-whispers.  That is what God is teaching me.  It really is sad to miss out on something amazing because of a lack of obedience.  Our job is to be willing to obey and be used for His glory.  We must listen for God’s direction and then run with it; the end results are His prerogative, not ours.  I am ready to learn how to live a life of unrelenting obedience; I am ready to shine.  These lines from a Newsboys song come to mind: 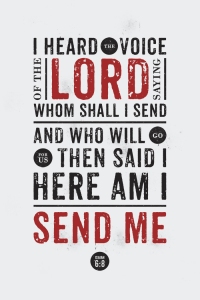 When we walk in His footsteps,

He lights the way;

When we lift up His banner and raise it high,

We light up the sky. 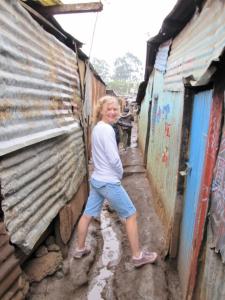 The rainy season doesn’t stop us – we’re out doing neat things all the time.  I got to go with my dad, a team from Brookhouse School and international students from Roun Square to help put up a resource center, or library, as I would call it, in the Kuwinda slum.  In the two square acres that make up this slum, there are about four thousand people (2 sq. acres + 4000 people = very crowded).  Every time we go out to Kuwinda, we literally find ourselves in a sea of people, mainly children.

On that particular day, though, there were more children than usual.  Why?  That’s an easy one: not only were we exciting visitors, we had brought books!  Dozens of books, hundreds of books, small books, big books, picture books, reading books, all for the children to borrow any time they wanted.  It is a larger collection of literature than any of these children had likely ever seen before.  Books are an invaluable commodity, especially here in Kenya where they are so costly to acquire.

The very best part about these books is that they will help create in all who read them a desire to learn about and understand new things, people, and places.  To be a part of giving a child the gift of a thirst for knowledge is a truly beautiful thing, and to be able to show them God’s love while doing so is even more amazing. 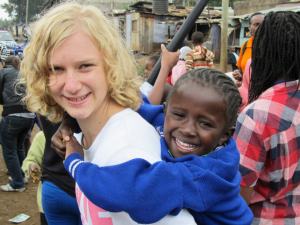