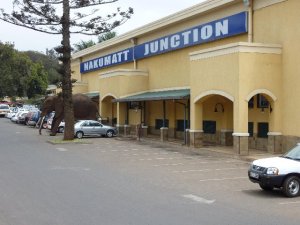 Nakumatt at Junction mall is a nearby grocery store but somehow this photo is missing the atms, matatus (taxi buses), shoe shine stands, armed security guards and the throngs of shoppers.

Grocery shopping isn’t nearly as simple as it was in Michigan. Each week the products are rearranged – often in quite a drastic way or a way that makes no sense, such as putting the apple sauce in the row with the tomato sauce (the African equivalent of ketchup) because they both said “sauce.” It just never ceases to amaze me and frustrate my efforts at following my shopping list.

A happy discovery I made, however, was the existence of sweet melon. Sweet melon is neither a cantaloupe nor a honeydew, but possess qualities of both – the rind and texture of a cantaloupe with the color and taste of a honeydew (it sometimes has the colors of both, being green with a orange-colored ring near the middle). Oh, and if the variety of the melon is unknown to you, just throw it in a bin and call it “sweet melon.” In addition, there are big, juicy pineapples and delicious, firm avocados in abundance. Dried fruit and nuts are more difficult to come by (and cost more $$$!). Pork of any kind is rare because people are partial to cattle and goats – hence the easy access to goat meat and ground beef! (Steaks are actually not as popular – I doubt many people know what a “grill” is.) And don’t get me started on cheese – seriously, imported cheese only, please — unless you are craving the taste of crayons. The cream cheese (which is fluffy and rather salty) also leaves something to be desired. If you are looking for the potatoes, try that mountain of dirt in the vegetable section. You want crackers? What are those???

Cherries: 42 cents each — did they ride first-class from Michigan? Don’t worry, I redeemed a frequent shopper punch-card and got these for free!